I’d like to take this moment to state that while good female role models are necessary, not every female character has to be a good person. I’d rather watch a funny show where everyone is flawed than something that puts women up on pedestals. I’ll also be the first to admit that Archer is a fucked up show. A cartoon by FX Network, the show follows the world’s number one secret agent Sterling Archer and his mal-adjusted co-workers. Episodes equally revolve around the character’s personal lives as well as the inner-workings of the International Secret Intelligence Service… or ISIS (yeeeah…this show is about seven years/seasons old). 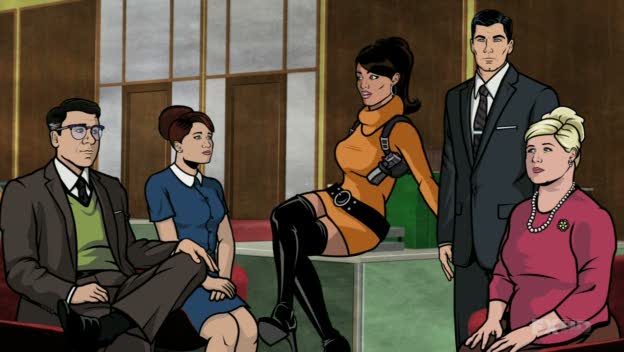 The agency is run by Sterling’s mother, Mallory, and the two have one of the most messed-up relationships on TV. Sterling is an overgrown man-baby, but as the show goes on he does change and grow. Still, after seven seasons you’d want the characters to show some growth, otherwise the concept gets stale.

The characters in Archer spend a lot of time tearing each other to shreds, but they all still manage to triumph in their own ways. The comedy comes from a mix of witty one-liners, completely ridiculous situations, and from the cast’s mix of personalities, not from lazy writing.

Take Pam, for example. She starts out kind of how you’d expect; made fun of for being overweight and conventionally ‘un-fuckable,’ but by the end of the show’s run she has slept with everyone in the office, is revealed to be a fierce bare-knuckle boxer, drift-races against the Yukuza and rescues her sister from being murdered by a psychotic robot.

Anyway, one of the best characters is Lana Kane, voiced by the magnificent Aisha Tyler. She’s a highly intelligent, tall, sexy black woman who kicks serious arse at her job. She carries two fully-loaded tech nine’s as a matter of course, which I normally wouldn’t count as a positive except her job makes it necessary.

Lana is arguably the least mal-adjusted of all of the whole cast, but that doesn’t mean she lacks depth. She spends a lot of time reigning in Archer’s antics and making sure that they come through their missions in one piece. She’s incredibly smart and strong, but has a very short temper. This can probably be put down to growing up as a tall and gawky teenager, as she doesn’t tend to let insults slide. Having said this, she doesn’t just slip into the stereotypical ‘angry sassy black woman’ trope, and they don’t just make fun of her anger. The seven seasons (so far) show Lana trying to find the right balance between her work and her femininity, eventually having a child by IVF because dating is shitty when you work 24/7 and your office is full of jerks.

At the beginning of the show she’s dating Cyril, the ISIS comptroller and resident wuss sack. I’ll admit, when I first watched Archer I felt bad for Cyril, but as time went on I came to the conclusion that although he seems kind and smooshy on the outside, on the inside he’s an entitled, misogynistic shit-bag. Yes, I know, Archer is also an entitled misogynistic shit-bag, but unlike Cyril Archer doesn’t pretend to be anything else. Cyril actually thinks he’s a nice guy and maintains that he’s nicer than his co-workers, but then he goes and does something super dickish like abandon his friends for dead or cheat on Lana or slut shame her or become a South American dictator and force a woman to marry him at gunpoint. But anyway, enough about Cyril the shitbag…

Lana dates Cyril because he’s the exact opposite of Archer and she can control the parameters of the relationship. Cyril ends up cheating on her because he’s a hugely insecure jerk, a condition which he self-diagnoses as being a sex-addict, and Lana dumps him right away. When she finds out the extent of his cheating (season one, episode 10, Dial M for Mother) she exacts revenge specifically targeted at Cyril’s possessive ego.

Cyril:  Of my own office?

Lana:  Oh, you don’t want to be here when I bang every last dude in the building…

Lana:  Right here, on your blotter.

Lana:  Really? Is it opposite day already?

Lana:  Hi, this is Agent Kane, and if you want to have ball-slappy sex with me on Cyril’s desk, please line up and take a number.

A crowd immediately forms outside of Cyril’s office, and Lana charges them all $600 to say that she had sex with them.

Brett: The part where we don’t have sex?

Lana: You get to say we did, which is like half the reason men have sex

Brett: But that’s a lot of money

Lana: Not compared to rotator-cuff surgery, which you’re going to need after the jillion high-fives you give your little bros.

Lana’s condition with all of these guys is that the first person they tell is Cyril, and that they make up the sickest story they can think of, purely to get him mad. Because, dammit, he has no right to be petty and possessive and jealous of Lana after cheating on her multiple times.

So while the better course of action may have been for Lana to take the high road, she makes the low road look fantastic. 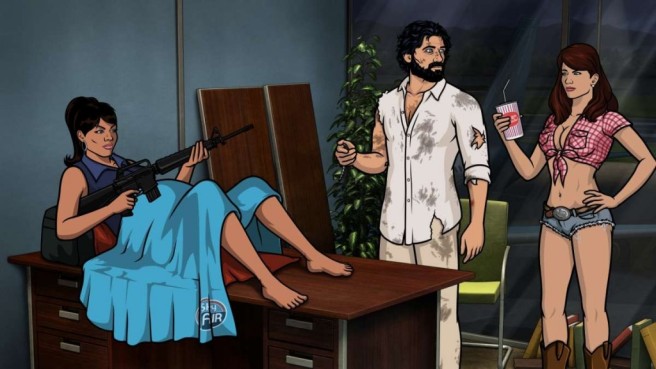 Still, Lana eventually grows out of the need for petty revenge. By season four she decides she’s ready to start her own family, but given the void of stable men in her life she decides to get pregnant by IVF, which she finally reveals at the end of season four in the episode Sea Tunt part 2. After this her priorities change, as you’d expect. She still has her moments of being completely out of line, however, which proves she still has some growing to do. Take, for example, the first episode of Archer: Vice titled White Elephant. 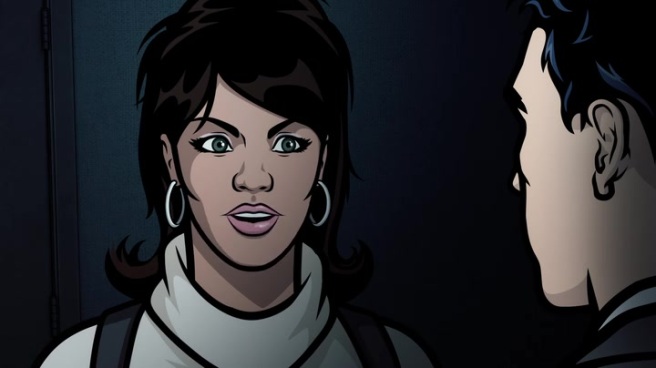 Lana:  I could start smoking crack TODAY and [the baby] would still turn out better than you!

Archer:  And why is that? Because I never had a father, Lana. So why don’t you shut up and then also marry me.

Archer:  I’m serious. We can go underground, get new identities and spend the rest of our lives together, Lana. Be a family. You, me the baby and your not-that-weird-looking vagina.

Lana:  Okay, don’t take this the wrong way… but I would rather lose the baby.

I actually like that they threw this in there, because it means that Lana doesn’t always say or do the right thing – despite her growth she is still a flawed character, and it keeps her relatable. She is completely out of line, and the expression on her face says that she knows this immediately, but there are some things you can’t take back. That Archer then comes back into the room and laughs, saying, “come on, you idiot” as though completely unfazed by what she said, but that doesn’t mean that Lana isn’t freaked out by her own behaviour. 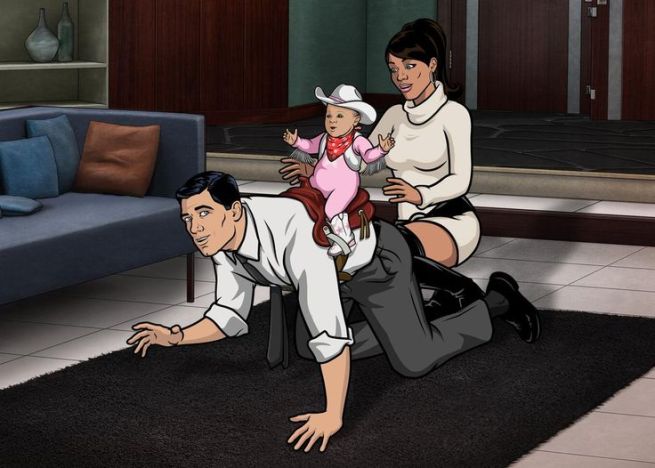 After her child is born at the end of season five (the Archer Vice series) Lana reveals to Sterling that he’s the father. After some initial panic, Archer actually steps up and tries to be a father, albeit in his own functional-alcoholic kind of way. He even agrees to meet Lana’s parents in the season six episode The Kanes. This episode is probably the most overt in Lana’s character progression, because she finally tells her parents what she and Archer do for a living. The following happens during a car chase through the streets of Los Angeles. 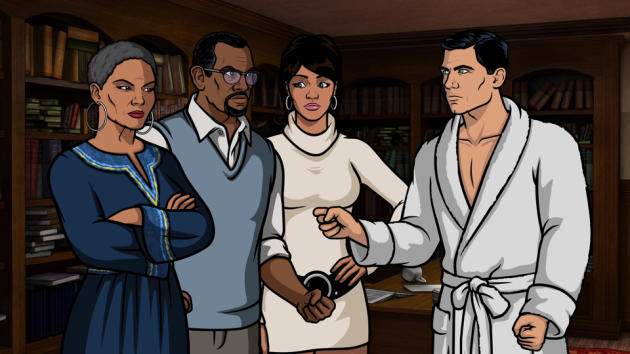 Lana: You see? This is why I never told you! I knew you wouldn’t understand.

Dr Kane: Because you could have been a great scientist, Lana. How could you have just thrown away your God-given talent?

Lana: But it wasn’t my talent, Daddy. You and Mom just wanted it to be.

Dr Kane: Oh, come on now! You used to love going to all those science fairs!

Lana: I used to hate it! Remember I always threw up in the car on the way there?

Lana: From terror! But I was always so afraid of letting you and Mom down that I could never tell you how I felt.

Dr Kane: Hey, come on now. You could never let us down, honey. I hope you know that.

During this same car-chase and shootout Dr Kane invites Archer to the Kane family reunion, because even though he’s an idiot he’s still the father of Lana’s child. 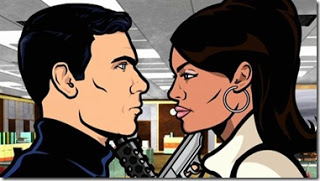 So, since the start of the series Lana has been slowly learning to trust people again, especially Archer. But as Archer becomes less of a douche Lana is able to very slowly let her guard down.

Archer is a show that masks its character development behind horrific jokes and innuendo, but long-term viewers are rewarded with characters that grow and change by subtle degrees without losing their core personalities. This is more realistic than a lot of other characterisation – people don’t drastically change overnight. That all of the characters in Archer are seriously dysfunctional is less realistic, but it makes for great TV.

One thought on “Lana Kane: A Lesson in Subtle Character Development”