So, this week I wish to discuss one of the standout Aussie films of 2015, The Dressmaker.

Based on the novel by Rosalie Ham, The Dressmaker stars a cavalcade of actors whom you might not have known were Aussies if you happen to live anywhere else (hello to all of my international readers). The only non-Australian actor involved is Kate Winslet. She plays our protagonist, Myrtle “Tilly” Dunnage, and pulls off such a convincing Aussie accent that we’re about ready to claim her as our own.

I saw this movie at the Cinema and fell in love right away. I didn’t go in with high expectations. It seems that the bulk of what is considered classic Aussie cinema is set in the outback or dustbowl country towns, and this is what tends to identify us internationally; Priscilla, My Brilliant Career, Crocodile Dundee and the Sydney Opera House. So when I saw previews for another Australian film set in a dusty country town I wasn’t overly fussed, but my mother said she wanted to see it with me, followed by these two magic words: “I’ll pay”.

Set in 1951, the opening scene shows Tilly stepping off a bus carrying a Singer sewing machine and looking immaculate in a Dior-inspired dress. She looks around the Dungatar town square, taking in the general store, the agent and the chemist before lighting a cigarette and proclaiming, “I’m back, you bastards.” She’s back and looking for revenge, reminding us of the classic old Western. This feel of an old Western narrative also informs the set design, in particular the pub and general store, as well as the way the shots are composed.

If you get the chance to see this film on the big screen, do it. The cinematography is beautiful. Filmed just outside of the You Yangs mountains, the scenery is particularly striking. There is barely a shot that isn’t beautifully composed and balanced. The colour palette begins drab and faded, the better to showcase the magnificent costumes that arrive in town along with Tilly. These outfits are her weapons; her skill as a dressmaker is akin to Clint Eastwood’s quick draw.

She is greeted by the only policeman in the town of Dungatar, Sargent Farrett, played by Hugo Weaving (yes, Elrond is one of ours). She asks after her mother. His response of “Molly doesn’t get out much these days” is an understatement – when Tilly steps inside her mother’s old house on the hill she discovers a total mess, full of junk and dirt and complete with a resident brushtail possum. Molly doesn’t look much better.

The next day, Tilly is standing outside the house at the top of the hill overlooking the rest of the town. She’s wearing a gorgeously tailored golfing outfit, complete with little slots for her golf tees. She pulls out a tee like a gunslinger reloading her weapon. She places the ball, lines up her shot and says to Molly

“Do you remember Ms Harradine, the schoolteacher?”

She then takes her shot and the ball goes flying, ringing the school bell and smashing one of Ms Harradine’s hanging flower pots.

Tilly: What about Mr Almanac, the chemist?

Molly: I don’t even know who you are.

Tilly then lines up her shot and the ball lands on the roof of the chemist, startling Mr Almanac as he’s perving on some customer’s photographs.

Tilly: What about Shire President Pettyman? Now there’s a reason to vote!

This time, Tilly’s golf ball lands on Mr Pettyman’s roof, causing him to jump while he’s cutting out yet another press clipping of himself.

Molly: I don’t know why you’ve come to this hole. There’s nothin’ here.

Tilly: I came because I need you to remember me, Mum.

Tilly: I need you to remember so I can remember.

Molly: Remember what? Being my daughter?

Molly: Fat chance. What else?

Tilly sits down and looks her mum in the eye.

Tilly: Did I commit a murder?

Tilly: Am I a murderer? Is that why I’m cursed?

Molly: It’s not something you’re likely to forget.

Molly: What if you are a murderer?

Tilly: I wouldn’t be in the least surprised.

The very next scene involves Tilly trying to get Molly to take a bath, complete with Molly screaming “MURDER!” at the top of her lungs. Tilly then gets to work cleaning up the house and lighting a bonfre, which draws the attention of the rest of the townsfolk.

Meanwhile, one of the town’s most eligible bachelors has returned home. William is shown off around town by his overly proud mother while Gertrude Pratt (her father runs the general store) pines over him, knowing that her plain looks will never win him over.

The next day, Tilly goes to the local football grand final match. Her outfit causes a huge stir and distracts the players, to the point where Teddy, Liam Hemsworth (yes, we have the Hemsworths too!), asks her to please get changed.

Teddy: Your getup’s distracting my players.

Tilly: Well I do have an unusual talent for bias cutting.

Teddy: Tilly, the only reason these bastards haven’t run us McSwineys out of town too is because me dad empties their shithouses and I win ‘em the footie. We lose this match, all I’ve got left is the shit.

So Tilly gets changed. Just after she does, she gives her business card to Gertrude Pratt, suggesting that if Gert wanted to go to the footballer’s dance next Saturday Tilly could make her something.

Gertrude: A dress can’t change anything!

Tilly’s wardrobe change proceeds to win the Dungatar boys the match. Gertrude takes her up on the offer. When the rest of the town see how stunning Gertrude looks in her new couture dress, all of the women are asking Tilly to make them gorgeous things to wear. 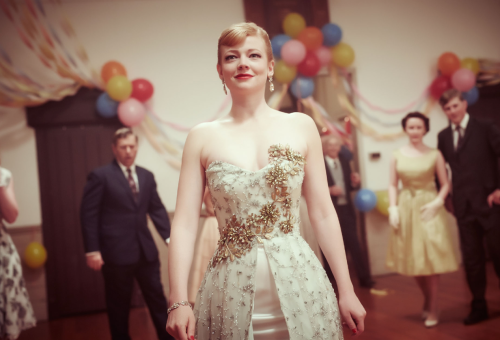 They flock to Tilly every time she gets a new tea chest full of fabrics from an exotic location. Seargent Farrat is even more enamoured with Tilly’s fabrics than the ladies – he’s been living as a closeted crossdresser all of his life.

In a moment reminiscent of Priscilla, we get to see Hugo Weaving wrap himself in some striking red fabric and let it flutter in the breeze as he gazes at himself in a mirror tree. Tilly uses her skills to win over the women and Sergent Farrat so she can work out what happened twenty years ago, but not everyone is forthcoming.

That’s about as much of the plot as I’m prepared to give away. If you want to know what happens you’ll need to watch it.

The Dressmaker manages to perfectly blend dark comedy and drama. Most of the comedy and one-liners come from Molly, delivered by veteran Judy Davis with expert timing, although the other characters pull some magnificent facial expressions, deliver hilarious deadpan dialogue and perform marvellous slapstick.

There is a romantic element to this film, but it manages to stay secondary to the main revenge plot. Liam Hemsworth plays the romantic lead, in a story that is more “you and me against the world” than “I’m going to protect you from the world” – he knows who the rest of the town really are, and sees a kindred spirit in Tilly as they are both outsiders who are only tolerated for their skills. I should also point out that this casting bucks the usual Hollywood tradition of casting an older man with a much younger woman – Kate Winslet is forty years old, but Liam Hemsworth is only twenty-six.

The Dressmaker is a stellar example of characterisation and costuming. The costumes are by Marion Boyce, the genius artist behind Miss Fisher’s Murder Mysteries’ wardrobe department. Tilly’s clothes give the townswomen confidence and help to bring out their true nature, which isn’t to be confused with bringing out the best in them. Some help Tilly when things go wrong, but most just hurt her until they need something from her again.

Tilly herself transitions from being hard-nosed and closed off to opening up to those close to her, but when things go south she still maintains her edge. This is partially due to Molly’s influence. Molly has been alone and neglected for twenty years, but when Tilly comes home she has care, companionship and mental stimulation she goes from being “Mad Molly” to the strong, quick-witted woman she once was.

This sensational film brings together dark comedy, romance, drama, slapstick and even elements of horror to deliver a rich story with iconic characters. There is so much symbolism and beautiful imagery I would love to discuss, but for that to happen I need for more people to see this movie.

The most important thing, though, is that this is a movie written and directed by women, where stories of fashion, downtrodden women and battered wives are central. This is a film for the female gaze. Women are celebrated, not objectified. Liam Hemsworth is shirtless for a couple of scenes. As such, most of the reviews are divided along gender lines – this movie was panned by plenty of male reviewers. But if you care about great stories about women or just great stories in general, watch this movie.

Please get yourself a copy of The Dressmaker. Please don’t pirate it, it deserves your actual money-dollars. I picked up a DVD at JB HiFi for $16, but if that’s too much you can probably get it on some streaming services. I’d also like to reiterate that if you’re a fan of Miss Fisher’s Murder Mysteries (and by next week’s blog you will be) you’ll adore this film for the costuming as well as all the other great stuff.

Trust me, the ending is killer.