In the eighties we had Sixteen Candles, The Breakfast Club and Pretty in Pink. The nineties had American Pie, Clueless and Ten Things I Hate About You. In the last decade we had Mean Girls, Juno and, in 2010 but I’m still counting it, Easy A.

Easy A is one of those films I keep coming back to, and personally I find that it’s hugely underrated. The dialogue is a masterclass in witty repartee all on its own, and the script has a few moments which pay homage to classic eighties teen flicks. It keeps getting compared to Mean Girls, and while both are about teen girls and high school drama they tackle very different issues. While Mean Girls is about social cliques and the toxic way teens treat one another, Easy A is more about teens being judged for their sexuality, particularly girls.

The film is narrated by the protagonist, Olive Penderghast, played by Emma Stone and her incredible comic timing. The story begins with her best friend, Rhiannon, asking if Olive can go camping with her for the weekend. Not wanting to be trapped with Rhi’s pothead hippy parents for two whole days she makes up a story about having a date with an older guy. She actually spends the weekend like this.

When she and Rhiannon reunite on Monday, Olive’s story gets away from her and Rhiannon winds up asking, flat out, if Olive had sex with her imaginary date. Olive protests and says she didn’t, but Rhiannon won’t let it drop so finally she says she did, out of pure frustration. Her voice over then says,

“I don’t know why I did it. I guess maybe it was the first time I had felt superior to Rhi. I just kept piling on lie after lie, it was like setting up Jenga.”

Unfortunately, their conversation is overheard by the leader of the school’s gang of obnoxious self-righteous Christians, Maryanne Bryant. Just like that, the lie of Olive’s lost virginity spread around the school with incredible speed.

This leads to an argument with a girl in her English class (one of the obnoxious Jesus freaks) who suggests that Olive sew a red letter A for adulteress on her wardrobe, referencing The Scarlet Letter.

Nina: Perhaps you should embroider a red A on your wardrobe, you abominable tramp.

Olive: Perhaps you should get a wardrobe, you abominable twat.

(Gasps from their classmates)

Rhiannon: Please tell me the rumours are true!

Rhiannon: No, no not that one. The one where you got suspended for calling Nina Howell a dick and punched her in the left tit!

Olive: I worry about the way information circulates at this school.

The next day she serves her detention with Brandon, a boy who got beaten up for being gay and was given detention for calling their homophobic principal a fascist. While they serve detention by cleaning the school they talk about the rumours and Olive’s new “whore couture” outfits. 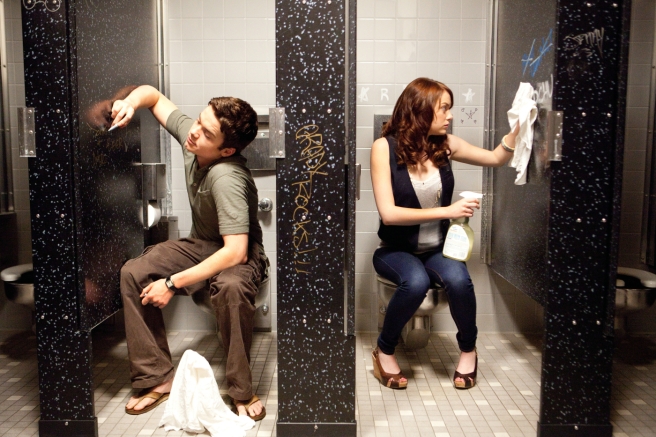 Olive: The guy I slept with. I made him up.

Branden: You started the rumour?

Olive: Indirectly, I guess, sort of. Or actually no, not really I didn’t.

Branden: Well, you’re not even a real slut, you just want people to think you are. It’s pathetic.

Olive: Uh, no offense but uh, you could probably learn something from me Brando.

Branden: Are you saying that I should act straight so people will like me? That’s ground-breaking.     You should teach a course at the learning annex, it could be called “The Painfully Obvious with Olive Pendergasm The Big School Slut.”

Olive: I was just suggesting that maybe these kids we call “peers” are on to something.

This leads to Olive and Brandon hatching a plan to make Brandon appear straight, which involves them staging an incredibly fake sexual encounter at a popular girl’s house party. Behold.

Of course, their peers listening at the door probably wouldn’t know the difference. Seriously, if there is anybody reading who is still in school, know this – a vast majority of your schoolmates are lying about their sex lives. Some aren’t, but most of the ones who brag about having sex haven’t. Also, the younger you are and the larger the number of sex partners, the more likely they’re lying.

Anyway, as Brandon leaves the room he is engulfed in a swarm of other dudes who want to praise him, cheer for him and ask him how it was. He’s lauded as a hero and goes from being ostracised for his real sexuality to being called awesome for his fake one. Olive, on the other hand, is stared at and silently judged. She then gets a phone call from Rhiannon, who tells her she needs to stop because everyone’s calling her a slut. This erupts into a huge fight, because Rhiannon is jealous of Olive’s popularity and because Olive is too stubborn to tell Rhiannon the truth while she’s being yelled at, and Rhiannon probably wouldn’t believe her at this point anyway. Olive then decides to buy an even trampier wardrobe and to sew red As on every piece. “People thought I was a dirty skank? Fine. I’d be the dirtiest skank they’d ever seen.”

Meanwhile, Brandon has told a friend of his the truth about him and Olive. This friend, Evan, asks Olive if he can pay her to tell everyone that he got to second base with her. After initially being offended Olive agrees, but she points out to Evan that if he’d just been a gentleman and asked her out she probably would have said yes.

The rumour that she’s soliciting sex for money spread even faster than the last two, but for the nerds who know the truth she was a lifeline. They paid her in gift cards for the privilege of telling people they hooked up with her and her confirmation of the story.

I’m not going to tell you how the movie ends, but I will mention one poignant quote toward the end – that “Notoriety never seems to benefit the noted, only the note-ees.” Olive realises that if she had known that at the start she might not have escalated the whole mess and everything would have died down reasonably quickly. Then again, the only reason she let people spread rumours about her is because she felt bad for the down-trodden.

The film continues on with the constant demonising of Olive while the guys spreading rumours don’t even cop side-eye. In fact, Evan actually starts getting asked out by girls. The way that society has commoditised feminine virginity while using sex as a marker for masculinity is deftly handled in this film, especially when you realise that Brandon’s bullying for being gay stems from the notion that to “be a man” is to shag women, while to have sex with a man is shameful. To be dominant (man) is good, to be submissive (woman) is bad. Fuck that.

When a sex tape is released nobody talks about the guy in the tape, it’s always that the woman is a tramp (even when she’s not aware she’s being filmed and it’s distributed against her wishes). When hackers leaked celebrity nude photos last year the only people threatened were women, because to be anything other than virginal is worthy of ridicule. I’m not saying that we should start demonising men for enjoying sex too, I’m saying that legally consenting people who have sex should be treated as normal people. Sleep around all you want, just be safe and don’t hurt anyone in the process. Damn!

At one point the Christian students even picket the school, but all of their signs are about Olive being a tramp rather than all of the boys shagging around. It should also be pointed out that this mindset hurts men too – if you haven’t had sex you’re deemed a loser or gay, and guys get away with sleeping around because ‘boys will be boys,’ which is another way of saying men can’t handle themselves and their basic animal instincts and can’t be held accountable for their actions. Which is bullshit. They can control themselves, they just never get told they should. So, you’re either a sex maniac or a loser, there’s no middle ground.

One last thing I will say about this film – the main reason I keep coming back to it is Olive’s parents and their family dynamic. Seriously, if hell freezes over and I wind up having children, these are the parents I would try and emulate. (Sorry, Mum).

Easy A features some incredible dialogue and is one of the few teen movies that is clever, well-acted and funny. I sincerely hope that in the next ten years it’s considered to be one of those classic teen movies that people reference and re-watch. If you haven’t seen it, it’s on Netflix. It’s a pocket full of sunshine.